The town of Humenne is located in the north-east part of Eastern Slovakia, in south-west part of the district of Humenne, in the valley of the Laborec river, that flows partially along the State road No. I/74 and railway road No. 191 (Medzilaborce – Humenné – Michalovce – Trebišov – Michaľany), No.193 (Prešov – Strážske – Humenné), No. 196 (Humenné – Stakčín) Zvolen, in the altitude of 157 meters in a geomorphologic unit of upland of Ondava (Ondavská vrchovina), sub province of Outside Easte part of Carpathian Mountains, subpart Humenske podolie, part Sokol. 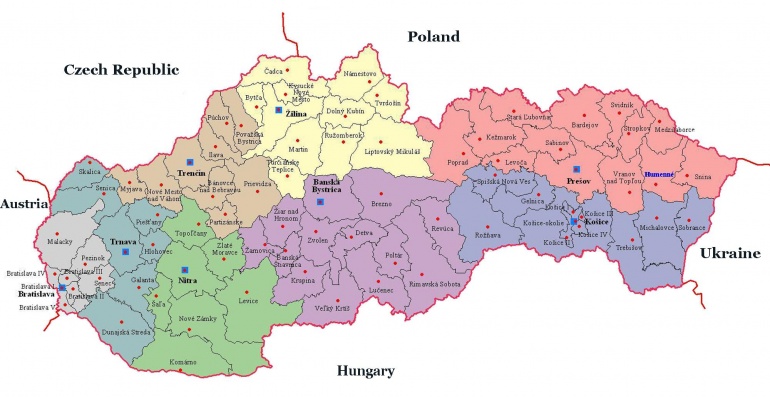 From a geologic standpoint, these geomorphologic units belong into a flysch mountain range, built on alternating bases of sandstone and claystone.

From the standpoint of hydrology, the area belongs to the basin of the Badrog River. River Laborec flows through the settled area of the town, where safety barrage was built to protect the area from floods. Water accumulation is typical, in the period from December to February, with the year’s highest flowage in the month of March and lowest in the month of September. The average annual flowage of the Laborec River in Humenne is 10 m3 per second. The cadastral border runs along with the river Laborec to East, and then it continues around the stone-pit in Jasenovo and through the north part of Sokol, continuing through the valley of Ptava creak, braking near the ground elevation of Humenne in sharp break toward the north. Then it continues over the Čarnuška habitat, crossing the state road, railway road and confluence of the rivers Laborec and Circha and runs over the valley of Hubková, when turns to the west around the ground elevation of Petočová. From the habitat Vyšná Hubková, it leads near-by the Humensky creek to south, under the Hola hora mountain it changes its direction sharply to the west and behind the creek Lieskovec, it takes comparatively fluent south-west direction towards the Brekvska gate. The whole cadastre is enclosed by a flowline of state road and near-by river Laborec.

APPEARANCE OF THE NEW SQUARE

After many years of efforts of the town hall – to build a modern central square that would encompass zones for free time and social activities – has finally come to a successful end. Today, the square functions accordingly to its desired purpose.

The central landmark of the town’s walking-zone is a lid-up musical fountain situated right in the middle of the square. Next to the fountain, there is a performance stage for public culture events, together with built-in public toilets.

North part of the square is remarkable by its night-lid water-covered area symbolically named the “Stream of time”, where you can see the bust of Slovakia’s famous politician, diplomat, and astronomer M. R. Štefánik. 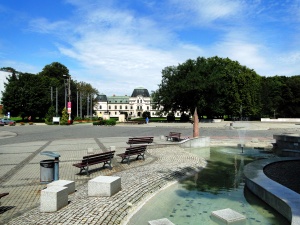 Along both sides of the square, there are about twenty fancy exterior pole lights along with garden lighting imbedded in green yardage together with hi-power spotlights aimed on the facades of the square’s historical buildings.

The authentic high greenery is now complemented by areas of short greenery with flowers where visitors can rest on one of the fifty-four benches.

The overall image of the square is complemented by small architectural items like car restraints, waste-baskets, bicycle rails and telephone booths in sets of 3 on each side of the square.

Contributing to the safety of both – persons and property on the newly redesigned walking zone, there is an installation of an intelligent camera monitoring system.

The 26th November Street is an up-to-date contribution to already modern look of the square. In the future, more streets that are attached to the square will be redesigned in this same manner.